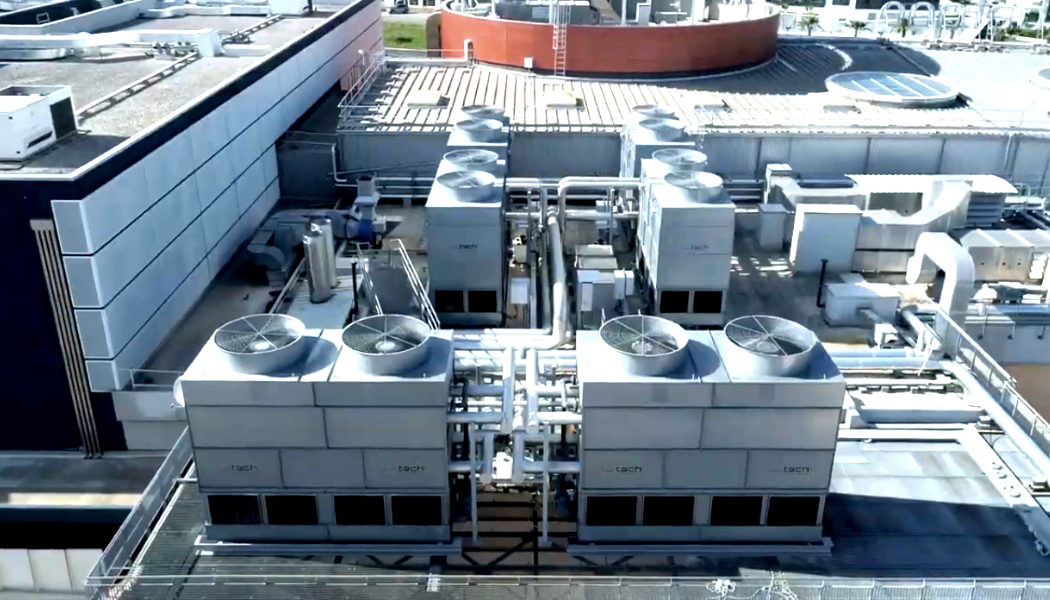 Evaporative cooling units are suitable for almost all applications and processes where cooling is required, significantly accelerating production times and performance, with a positive effect on lower consumption of natural resources such as oil, natural gas, water and greater attention to preserving the environment, and, as a consequence, a decrease in greenhouse gas emissions from thermoelectric plants for the production of electricity and a decrease in noise pollution.

The quantity of water evaporated in the evaporative cooling process is conditioned by the wet bulb temperature of the ambient air which, precisely in summer, when the cooling needs are greater, is significantly lower than the dry bulb temperature. In this way, evaporative cooling equipment reaches lower water temperatures than those obtained with air-cooled equipment, whose performance is limited based on the ambient dry bulb temperature. The possibility of reaching water cooling temperatures in our climatic zones up to + 25ºC or even lower, allows the use of intermediate heat exchangers, which means that the treated fluid can be cooled in a closed circuit up to + 30ºC or less. While with air-cooled equipment, which depends on the dry bulb ambient temperature, the minimum temperatures that can be reached are much higher and can reach up to 50ºC. In many cases, these temperatures are so high that the process is impractical or very low in performance, and they also require larger amounts of energy to evacuate or dissipate the process heat.

Indeed, evaporative cooling equipment saves energy. First, the lower temperatures of the cooling water ensure the operation of the process and reduce its energy consumption; secondly, the equipment is highly energy efficient thanks to the use of evaporative latent heat transfer, which allows the elimination of a greater amount of heat than that obtained with the use of a transfer of traditional sensible heat, i.e. it requires up to four times less air flow than an air-cooled process. Therefore, with this technology, the condensation of refrigeration and air conditioning systems can be carried out at a temperature that can vary between 6 and 18 K lower than in the case of air condensation.

This causes the pressure in the high sector of the refrigerant circuit to be much lower and the compression ratio to decrease. As a result, the compression work and the electrical energy absorbed by the compressor drive motor decrease. Thus, the energy required to run a specific refrigeration machine that condenses with evaporative equipment can be reduced by 20 to 80 percent, and sometimes even more than that of a machine that condenses with air.

On the other hand, since about a quarter of the air has to be blown, compared to air-cooled equipment, the power consumption of the fan drive motors is much lower.

Lowering the condensing temperature increases the volumetric production of refrigeration. This means that cheaper components are required to produce the same cooling effect: a smaller compressor, a smaller electric drive motor, a smaller condenser, fewer fans (less noise production and lower soundproofing cost). In addition, these units are 4 to 5 times less bulky and heavier than air condensers, which makes the support structure and placement more economical.

In order to produce the same cooling effect as the air-cooled units, a lower absolute value of the electricity demand peaks will be required, i.e. a lower investment in cogeneration plants for energy production and in the corresponding distribution lines.

Evaporative cooling used in water-cooled refrigeration and air conditioning systems is an environmentally friendly technology as it produces a lower environmental impact than its alternatives.

Reduction of the greenhouse effect

The lower energy consumption in the place of installation of the evaporative machines and the lower losses in the transport of this energy produce lower CO2 emissions. Conversely, traditional refrigeration systems produce an indirect greenhouse effect. It must be borne in mind that 1 kWh of electricity consumed by thermoelectric plants can mean, if coal is used, about 1 kg of CO2 emitted into the atmosphere; in the case of a combined cycle plant, the production of 1 kWh would be equal to 0.4 kg of CO2 emitted into the atmosphere. Therefore, in the above hypothesis, according to when established by the Anefryc Technical Commission, it is estimated that the increase in CO2 emissions would be 11,250 kT of CO2 / year equal to 3.

The lower condensation temperature allows, then, the application to technologies with low environmental impact widely and traditionally used in industry.

As for water leaks, in the place of application, evaporative equipment, used in refrigeration systems, reuses over 95% of the water that they mobilize during their operation. A small amount evaporates by dissipating the condensation heat, another is evacuated to avoid the concentration of salts and a very small part is carried away by the blown air.

The water consumed indirectly, i.e. at the source, is lower than in the case of air condensation, as an electricity production plant consumes about 100 liters of water for each kWh produced. Considering both the water consumption (direct and indirect), to produce the same cold, an air-condensing system consumes about 55% more water than if condensation is used by cooling with water recovered from a cooling tower, cooling down.

The noise pollution of these evaporative cooling units is reduced because they require less air flow than air-cooled units. Furthermore, the noise can be further attenuated thanks to the use of optional silencers.

Water cooling towers and evaporative condensers (adequately maintained from a mechanical and sanitary point of view) constitute a totally safe technology. The unjustified connection of several Legionella outbreaks to evaporative cooling and condensation equipment relates to some cases in which the water treatment inside the tower has not been properly managed.

However, the truth is that evaporative cooling equipment can only develop the “legionella pneumophila” bacterium, i.e. increase its concentration in the recirculating water, if the water it receives from the network is contaminated and the system is not properly maintained. There are very strict laws on this subject and, in our specific case, strict construction criteria are followed, which are communicated when the machine is purchased.

However, it should be borne in mind that Legionella manifests itself in a dangerous way only if several factors coincide, including:

If any of these links are broken, the chance of an outbreak is zero.

Evaporative cooling not only proves to be an environmentally friendly technology, but has also been able to adapt to the new requirements imposed by the conditions linked to pollution. These machines have extended their useful life thanks to the use of corrosion resistant materials, the development of more efficient exchange surfaces, reduction of noise levels through the use of quieter fans and possibly noise dampers and, finally, they are Sophisticated models have been created because the thermal performance of the equipment can be predicted under a wide variety of operating conditions.

In a present where energy saving is fundamental for environmental balance and for industrial competitiveness, its importance is multiplied. The rational use of equipment operating on this principle is beneficial for the user, the environment and, by extension, for society as a whole. In short, it is a safe technology (if adequate and constant mechanical and sanitary maintenance is carried out), respectful of the environment and economic, compared to its alternatives.